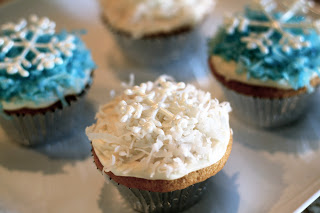 I made some coconut cupcakes for the first time this weekend for a winter themed baby shower. The shower was themed with snowflakes, the colors blue, white, and silver, and sparkly decorations. I tried to make the cupcakes fit right into that. I used a coconut cupcake recipe by Martha Stewart and topped them with cream cheese frosting. I topped some of the cupcakes with coconut that I tinted blue with an edible blue luster dust and the other half I topped with plain white shredded coconut. I decorated the tops with snowflakes that I piped out of melted Almond Bark. I placed the melted almond bark in a decorating bag with a tip #2. I piped the snowflakes onto wax paper and let them set in the refrigerator. Once they set I dusted them with blue and white shimmery luster dust and placed them on top of the cupcakes.