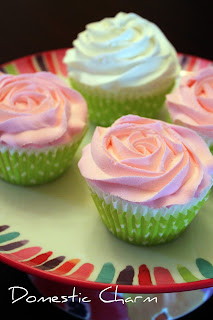 I ordered some cupcake dummies a while ago from The Bakers Nook and finally got around to making some fake cupcakes today. Some of you might be wondering why I would want fake cupcakes...I want to have some to display on cake plates that I am going to be selling. They also just look cute to display in the kitchen! However, I am not sure that is a good idea in our house. Hudson kept asking to taste the frosting the whole time I was making them, and could not grasp the fact that they aren't real. I don't blame him, they look like they would taste delicious! Here's what you'll need to make some: