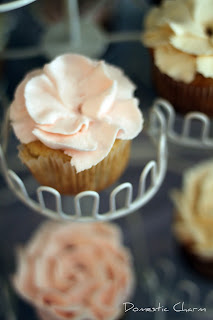 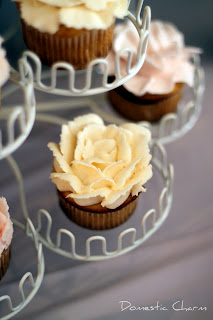 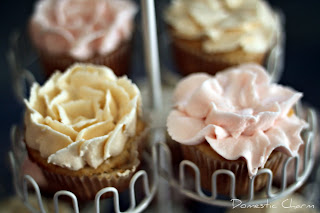 I also made these cupcake for Payton's 1st Birthday party. Amy had found the inspiration on Pinterest here, and I just did my best to make them look like the picture!
I used a large petal tip to decorate them, tip #127 with butter cream frosting. I colored half of my frosting a pale pink and the other half ivory. To create the rose flower you start at the center of the cupcake and hold the tip straight up and down, with the thicker edge of the tip pointed down. It helped me to hold the cupcake in one hand and the frosting bag in the other. For the first petal you circle it around to make just a small opening at the center, like a real rose would look at the center. Then you begin to add petals around, by tilting the tip out the petals will form a more opened looking rose and vice versa.
The other flower is formed by holding the same tip flat (horizontally) against the cupcake top with the thin edge of the tip facing out. You pipe about 6 or 7 petals around the outer edge, then 4 on top of those in the center. I have included the buttercream frosting recipe below. You use a lot of frosting to frost these cupcakes, I made 24 cupcakes and used almost all of the frosting that I made from the recipe below.

Buttercream Frosting:
Using a stand mixer with the paddle attachment cream together the butter, shortening, vanilla, and heavy cream until smooth. Add the sifted confectioners' sugar about 1 to 2 cups at a time. Scraping down the sides of the bowl as needed. Once all of the sugar is added mix at medium high speed for 1 to 2 minutes. If the frosting seems too stiff add more heavy cream 1/2 tablespoon at a time, it will thin out very easily. However, you will want this frosting to be stiff for piping the flowers onto the cupcakes.